Note: The exact location in Berhamsted will be posted close to the event

"Gorgeously shot… one hell of a debut… glorious… Felber’s future in filmmaking looks bright. Tides has an authenticity to it that’s hard to come by… Levinson’s Diner and Kasdan’s The Big Chill come to mind” ★★★★ THE UPCOMING

Set against the backdrop of Southern England's serene waterways, a group of fortysomethings gather for a sunny weekend reunion on a narrowboat steered by canal boat novice Jon (Jon Foster). Loaded with booze, the gang - Jon, Red (Robyn Isaac), Zooby (Jamie Zubairi) and Simon (Simon Meacock) - swiftly revert to their playful youth; Jon likes to entertain and Red, whether she likes it or not, can't help being a drama queen.

The four unwind, taking in the lush surroundings and sharing witty banter like the old days. But what soon becomes apparent is that something unspoken is bubbling beneath the surface... Through the unravelling of old relationships, and the occasional mishap along the way, this is sure to be a reunion the old friends will never forget.

Subtle, honest and packed with humour, TIDES is the arresting debut feature of Tupaq Felber, which premiered at London Film Festival in 2017. Shot in black and white in real time over a few days and loosely scripted in a collaborative effort with the cast, Felber's unique, naturalistic approach brings a refreshing edge to British film, and with TIDES creates a visually striking and truthful observation on friendship.

“a genuine discovery… this is an intimate and insightful piece of work, filled with wisdom and subtle insights. Shot in striking black and white, Felber cleverly infuses his low-key drama with a sense of the cinematic, and I think that his is a name we will be hearing much more of in the future.” Michael Blyth, LONDON FILM FESTIVAL

Written and directed by Tupaq Felber 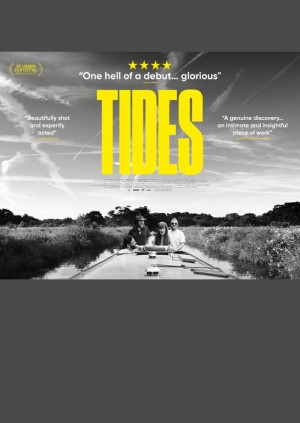