Of the Inland Waterways

Acclaimed waterways storyteller (and irrepressible boatwoman), Kate Saffin, will introduce you to a world of women who working alongside the men of the waterways but always on their own terms, seeing themselves as equals in ‘keeping the boats ahead’. With a sprinkling of her own "irresponsible" irrepressible moments since taking to the water in 1999.

Boater, writer, storyteller and actor, Kate Saffin has lived on a narrowboat and told stories of the waterways as solo plays since 1999. She trained as  a writer for stage and broadcast media at the Royal Central School of Speech and Drama.

She adapted the waterway’s classic ‘Ramlin Rose; the Boatwoman’s story’ by the late Sheila Stewart and has performed at canal festivals, pub gardens and Edinburgh Festival Fringe (attracting a four star review from The Scotsman). Other plays have retold the apparently true story of a brothel on a boat and a late coming of age for a pensioner who finds herself on holiday on a boat (Finding Libby). Currently she is mostly touring with Worcestershire Poet  Heather Wastie, as Alarum Theatre, with their double bill Idle Women of the Wartime Waterways which tells the stories of the WWII women trainees on the canals. In the spring and summer of 2018 they will be touring the canals of the West Midlands and the north. 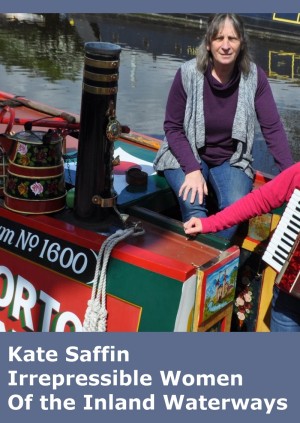